The Central Mass Chapter of The Women’s Caucus for Art will launch a battle of ideas and aesthetics in Shirley on March 5, playing realism off against abstraction and representation off against pure imagination.

The most realistic work is probably one by Joanne Stowell of Ashburnham. Her oil paintings capture snapshots of reality that are not typically the subject matter of conventional art. In “Rust and Eggs,” a wheelbarrow is turned over and a squad of chickens dance around the scene of the accident. In “Lived In,” the house is littered with bits and pieces of the artist’s childhood. The cushions on the brown sofa are crushed. A black dog lies on the floor. Comfort in this house is much more important than order. In this work, Stowell walks a fine line between the chaotic and the mundane of everyday life. Every object has its own story.

Joanne’s work employs fine, dark lines that outline and solidify the main forms. Susan Wadsworth, from Rindge, N.H., also uses dark lines in her work. Here the black ink is on a bed of colorful pastel. The lines provide the energy of the piece as well as the outer contour of the forms. “Pool Pond, Early Fall” shimmers with red, yellow and green from the peak of the autumn colors. “Devil’s Mountain, Temagami, Ontario” also displays black accents. Yet here we also see Japanese calligraphy etched into the stone of the cliff. Branches of red pine accentuate the texture of the foreground.

Abstraction makes a glorious stand in the photographic work of Ruth Nelson of Watertown, Mass. “Lace Curtains (Rusty Flashing)” is not what one would expect from the title — the red rust accumulates in striking patterns on the flashing metal roof. Seen close up, it is hard to discern what the forms are. The artist’s perspective forces the viewer to see this in a new way. The line between abstraction and realism is also evident in her “Vulcano (Rusty Wheelbarrow).” In a small JPEG, this looks like stunning autumn foliage, but up close the black lines break the red rust apart, and we feel absorbed into the texture of this disintegrating wheelbarrow.

In her new series of smaller canvases, C.M. Judge from Fitchburg pushes the forms of her recent “Risen” series into strong bands of blue, purple and pink upon a yellow background. The forms shoot upward and outward, ambiguous in their play of positive and negative space. This is her cheerful response to the transition between winter and spring. In her painting, “So We Meet Again,” the shapes conjure the feeling of coming together in a moment of affinity and affection. 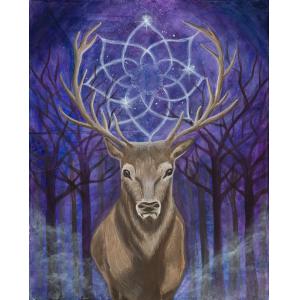 Shara Osgood, also from Fitchburg and the newest member of the group, moves from realism to visionary work. She visualizes lines and rays of energy projecting from her portraits and her animals. In Stag in the Mist, the animal in question has a starry glow between his antlers in the calm blue-purple of a winter’s evening. The lines of distant trees echo those of the antlers and the rays of light between the stars.

This exhibition at the Bull Run Restaurant opens on March 5 and will run until March 31. The Bull Run is at 215 Great Road, Shirley, Mass. It is open for dinner Wednesday to Sunday; the restaurant also serves brunch on Sunday. For more information, visit bullrunrestaurant.com or call 978.425.4311.